For the first time in many years, NordicTrack has introduced a brand new series of treadmills. The 2019 T Series replaces the popular C Series as the new affordable lineup, with 4 different models to choose from depending on your budget.

One of the most noticeable changes is that all four models have touch screen displays, warranties have improved and there are additional workouts on 3 of the 4, among other minor improvements. As such consumers and experts alike are very excited about the new treadmills. 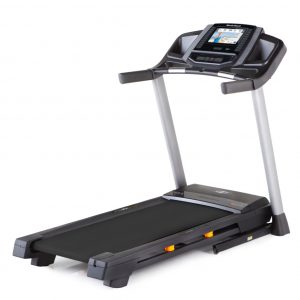 The T 7.5 S adds an additional 18 workouts for a total of 50 and Bluetooth audio capability.

The top of the line T 9.5 S is more advanced than any of the C Series treadmills, with a large 14″ touch screen and an even stronger 3.6 CHP motor.

How do the T Series treadmills compare to the other NordicTrack models?

It’s interesting to note that with all of the new features and capabilities, the entry level NordicTrack treadmills aren’t much different than the more advanced models. That’s good news for those on a budget who don’t want to sacrifice any helpful functionality.

Now that all of the Nordictrack treadmills have touch screens, the differentiating factors are the motors, the belt size, the incline capability and cushioning.

So the Commercial Series is going to be for the more serious runners and those who plan to use the treadmills very often.

The Incline Trainers, consisting of the X11i, X22i and new X32i, which are the most expensive NordicTrack treadmills, are very much like the Commercial models, except you have even more incline and decline: 40% and 6%, respectively. They have touch screens from 10″ all the way up to 32″.

So the Incline Trainers are even more advanced than the Commercial Trainers, built for the most serious runners and those that are seeking an experience that is like running outdoors, with steep hills and valleys. 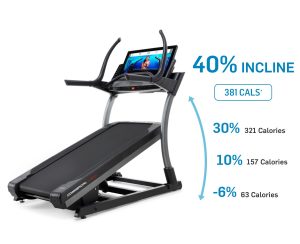 So Which NordicTrack Treadmill Should I Choose?

What’s great about the new T Series is that it improves upon the C Series, and as such is a good choice for a wider range of users.

If you want something for basic walking or light jogging, and you are of average size, consider the T 6.5 S. It has just about everything you need, although the deck size and motor are smaller than on the other T Series treadmills.

Because of these limitations you might be better off with one of the upper level treadmills. Look at the T 7.5 S and T 8.5 S if you need a little more room and plan to use it for jogging and running. The larger screen on the top of the line T 9.5 S is great, but you don’t necessarily need that. 10″ is ample enough.

If you are a serious runner, or just want something more durable and gym-like, then consider the Commercial Series. The Commercial 1750 is one of our top picks and one of the best home treadmills you can buy. They give you more incline plus decline training, a better cushioning to minimize impact on the knees and joints.

The Incline Trainers as we mentioned are another step up, with more incline and decline and super large touch screens. But they run from about $2,000 to $4,000+, and might be out of range for some people.

So here’s a recap for you to help you make a good decision….

The T Series is good for:

The Commercial Series is good for:

The Incline Trainer Series is good for:

If you need help choosing the right series or right treadmill within a series, please feel free to contact us. One of our experts will help steer you in the right direction.