NordicTrack vs. Sole vs. Horizon….Which Popular Treadmill Brand is Best? 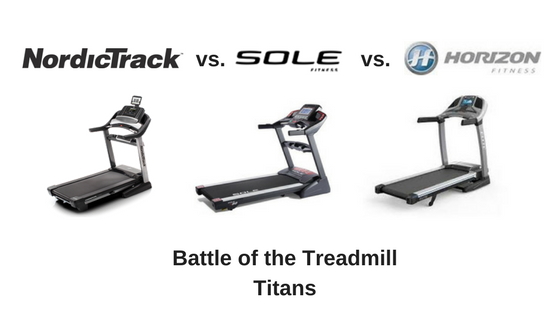 In the ever-popular $1000-$2000 price range, the battle for best treadmill wages on between NordicTrack, Sole and Horizon, the three biggest players in the space. We get emails all the time asking us to compare NordicTrack vs Sole, or Sole vs. Horizon, as it can be very difficult to choose between the three brands.

To help you out, we’ve created this guide with everything you need to know about the companies. Hopefully, it will make your decision even easier…

NordicTrack vs Sole – The Main Battle

We’ll start out with the biggest competition, which is between NordicTrack and Sole. These are the two most popular treadmill brands in the $1000 to $2000 price range, and they pretty much go head to head against each other. One of the most heated competitions is between the NordicTrack 1750 vs Sole F80, the two most popular models from each company.

NordicTrack is the number one brand, selling more treadmills than any other company. At any given time they have around 10 or so different models for sale, ranging in price from about $799 to $2999. But the sweet spot for the company is that $1000-$2000 spread, where most of their models lie.

Sole Fitness is another very popular brand that has made quite a name for themselves over the last several years. They offer fewer choices than NordicTrack, at around 6-7 models, ranging in price from $999 to $2499. However, most of their models are also in the $1000-$2000 range.

Both companies offer a nice selection of treadmills with various features and capabilities….so how do you choose between the two?

When it comes to NordicTrack vs Sole, it really comes down to what you are looking for. We are all different, and our fitness needs are different as well. For some, it’s all about the quality of the machine and the workout. For others, it’s more about the bells and whistles. Some people want to just get on and go, and others need some added features to keep them motivated and engaged. That’s really the heart of the comparison when it comes to NordicTrack and Sole.

In comparison, Sole treadmills don’t have as many features, especially on the lower priced models. None of the treadmills have touch screen displays or internet browsers. Also, Sole treadmills have a maximum of 10 workout programs, even on the priciest models. They do have Bluetooth technology which does allow you to track and share your workouts…however it is not as extensive as NordicTrack’s iFit program.

Where Sole excels, and at the end of the day this is probably more important, is in the quality of the treadmill and the workout itself. The company is much more focused on building a high-grade machine, with the ultimate cushioning, than adding in extra features and capabilities. And frankly it has served them quite well. There are many users, especially older ones, who aren’t interested in or don’t need all of the extras…they just want a solid workout on a solid machine with great cushioning to minimize impact. And that is exactly what Sole provides.

Here is a little recap for you:

Where Do Horizon Treadmills Fit Into the Picture?

Although not as popular as NordicTrack and Sole, Horizon treadmills are top-notch, and definitely deserve consideration if you are shopping in the under $2000 category. They offer a smaller collection, 5 in total and only 3 in the price range, but those 3 offer you a great deal of value. The one joining the NordicTrack 1750 vs Sole F80 battle is the Horizon Elite T7.

You can say that when it comes to NordicTrack vs Horizon or Sole vs Horizon, the company falls right in the middle of the two others. Whereas NordicTrack is all about the features and Sole is all about the quality, Horizon bridges the gap between the two, which is why they are a very good choice. Their treadmills, including the Adventure and Elite models, are very well built and designed, with top-notch cushioning. At the same time they come with a lot of extra features including touch screens, ViaFit tracking, Sprint 8 workouts, Passport HD videos, speakers and WiFi on some models.

Let’s look at the company’s three most popular treadmills head to head:

So Which One Should You Pick?

So basically if you are more about the bells and whistles, the extra features, the internet capability, etc. then you probably want to go for a NordicTrack treadmill. If you are all about the durability of the machine, the impact on your joints, just getting a solid, reliable workout, then you might want to go with a Sole. And lastly, if you’re somewhat in the middle, take a close look at Horizon.

The battle of NordicTrack vs Sole vs Horizon really comes down to personal preference. Your best bet is to look closely at all of the models and decide which one best fits your needs.