Discover where Americans are keeping fit and where they’re falling behind the pack.

Is America out of shape? Nearly 50% of Americans put on weight during the COVID-19 pandemic, according to a study published earlier this year by the National Library of Medicine. So if your pants feel a little tight these days, you’re not alone.

In addition, the CDC reported that 13.8% of U.S. adults are in poor or fair health overall, a rate that’s been creeping up in recent years. The country has high rates of chronic disease – an unprecedented 1 in 3 Americans are obese and 1 in 9 have diabetes.

But with the summer of 2022 in full swing, Americans are back to the beach and getting back in shape. That comes with a host of benefits that go way beyond the numbers on the scale. Exercise can help boost mental health and prevent chronic conditions such as diabetes and heart disease, and research shows it might even help you live longer.

Most people across all 50 states say they’ve exercised recently and that they’ve gotten a regular wellness checkup within the past year. Whether it’s because fitness is a key part of the local culture or residents have more opportunities to stay healthy, some states are in better shape than others.

RunReviews.com conducted an analysis to find out which states were in the best and worst shape. We fixed on two categories – health status and lifestyle indicators – and examined federal data for three metrics each across all 50 states and Washington, D.C. You can find the full methodology at the bottom of the page.

The state where residents get moving the most isn’t a state at all. The District of Columbia is fitter than anywhere else in the U.S., while West Virginia is in the worst shape, according to the analysis, which dug into health status and lifestyle indicators to reveal where Americans are seeing their hard work pay off.

Here’s what we found

* The nation’s capital is the most in shape “state” in the country, followed by Massachusetts and Colorado. West Virginia ranks last, while Arkansas and Mississippi round out the bottom three. Overall, the 10 states in the best shape are mostly located in the Northeast and Western U.S., and many in the Southeast fell at the bottom of the list.

* The states in the best shape tend to have low rates of obesity, heart disease and diabetes – and more gyms available nearby. In some states, though, there’s little relationship between residents’ health status and lifestyle indicators, underscoring that demographic differences, local infrastructure and other factors also influence health outcomes.

* Although West Virginia is in worse shape than any other state, Mountain State residents may be more health-conscious than their overall health status suggests: 81.9% of adults have gone in for a regular medical checkup in the past year, second only to Rhode Island’s 83.8%.

D.C. is in the best shape in the U.S., and scored above-average on every measure but one. Just 71.8% of adults had an annual wellness checkup in the past year, below the nationwide rate of 74.9%. That could be because Washingtonians are pretty healthy already: D.C. has the lowest rates of diabetes and heart disease (tied with Utah), and more gyms per 100,000 population than anywhere else, at 20.1.

Massachusetts, Colorado, Connecticut and New Hampshire filled out the top five fittest states. Massachusetts and New Hampshire boast 19.9 and 18.5 gyms available per 100,000, respectively, giving New Englanders plenty of chances to get moving. Meanwhile, Colorado’s obesity rate is lowest in the country at 24.2%.

On the other side of the scale, West Virginia, Arkansas, and Mississippi landed as the states in the worst shape. West Virginia has the highest heart disease and diabetes rates in the country, while Mississippi’s obesity rate tops the charts at 39.7%. They’re also some of the least likely Americans to say they’ve worked out in the past month, beat out only by Kentucky, which ranked as the No. 4 state in the worst shape overall.

Obesity is top indicator of a state being in shape

Among all six metrics, obesity is the most closely associated with a state’s overall score. That means if a state has a lower obesity rate, it’s fair to assume they rank higher on the list of states in the best shape – and vice versa. The three states with the lowest obesity rates – Colorado, D.C. and Massachusetts – are also the top three states in the best shape overall, while the states with the highest obesity rates – Alabama, Mississippi and West Virginia – rank at the bottom.

Keep in mind it’s not a perfect correlation, though, and body mass index isn’t the only indicator of a person’s overall health. Exercise rates, for example, were almost as closely tied to states’ overall rankings. Utah scored the best on that metric, with 84.1% of adults saying they’ve worked out within the past month, followed by Colorado (83.4%) and Washington (82.2%). Overall, 76.9% of Americans said they’ve been active recently. 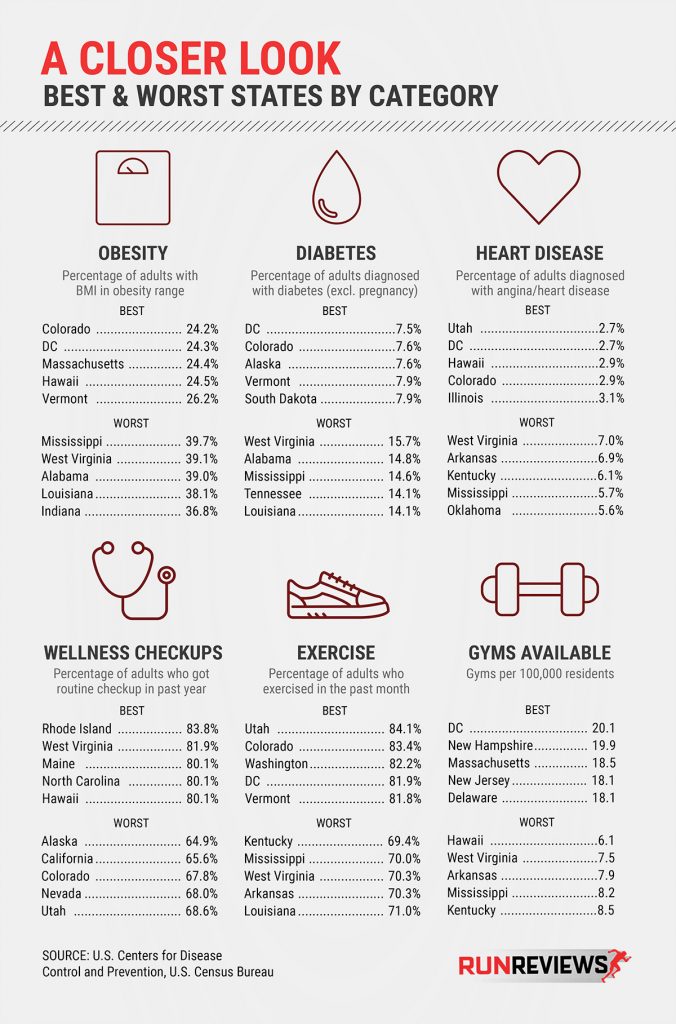 Diabetes and heart disease rates play a role, too, given 10.8% and 4.3% of U.S. adults have those conditions, respectively. States with higher rates tend to rank among those in the worst shape, but Pennsylvania, which ranks No. 30 overall, is an outlier, with 5.5% of adults having heart disease – one of the highest rates in the country. Meanwhile, the 10 states with the highest diabetes rates rank no higher than No. 40 overall. That one’s Texas, where 12.6% of adults have diabetes.

The number of gyms per state population is also positively associated with residents being in good shape. No. 5 New Hampshire had 19.9 gyms per 100,000 state residents, compared with No. 46 Oklahoma’s 8.8. Hawaii, which ranked 11 overall, is the exception, with just 6.1 gyms available per 100,000, fewer than any other state.

Interestingly, the share of the population with regular wellness checkups was the only metric to be slightly negatively associated with a state’s overall ranking, meaning people in generally fitter states were a bit less likely to see their doctor for a routine visit in the past year, including No. 3 Colorado, where 67.8% had been to the doctor, and No. 9 Montana, where that share was 70.6%. That correlation was relatively weak, though, and overall, about 3 in 4 Americans said they’d gone in for a wellness visit.

Health status and lifestyle indicators aren’t always aligned, and No. 14 Utah and No. 28 Alaska saw the biggest gaps between their scores for the two categories. Both states have below-average rates of obesity, diabetes and heart disease, despite being less likely to keep up with annual wellness checkups and having fewer gyms available than the country overall.

Meanwhile, Delaware scored above-average on lifestyle indicators because residents of the First State keep up with their doctor’s visits and have more gyms around. But the state’s high rates of obesity, diabetes and heart disease dragged its overall ranking directly to the center, landing Delaware as the No. 26 fittest state in the U.S.

Tips for staying in shape

Deciding to get yourself in shape can be daunting. If you’re just launching your fitness journey, try these five tips to keep on top of your goals.

Incorporate physical activity into your routine. Go on a brisk walk or a bike ride in the mornings, or hop on one of our best treadmill picks. Do an online yoga class after work. Plan a weekend hike. Start small, and keep upping your activity until exercise becomes a daily habit. The CDC recommends that adults get the equivalent of 75 minutes of high-intensity exercise per week.

Find a workout buddy. For some people, it may be easier to stick to a plan when they’ve got someone to hold them accountable. So call up a friend or two and make plans to meet up, whether it’s to play pickup basketball, go for a walk around the park or head to a workout class.

Stay on top of your nutrition. Completely changing your diet at once can be overwhelming, so focus on making sustainable changes over time. Stay away from fad diets, and plan out healthy meals before you head to the grocery store. Whole grains, protein and fresh greens are your friends.

Make sure to hydrate. It’s important to drink enough water even when you’re not exercising. Your body can’t perform as well when you’re dehydrated, and the American Council on Exercise recommends drinking 17 to 20 fluid ounces of water two to three hours before working out.

Be patient. Remember that you likely won’t see results right away, so go easy on yourself. Rest when you need a break, and switch up your routine if it stops feeling fun. Wellness is a marathon, not a sprint – and your health is worth investing in.

We used federal data for six population-level metrics to determine the states in the best and worst shape. We used a Z-score distribution to scale each metric relative to the average across all 50 states and Washington, D.C., and multiplied these scores by -1 if they were negatively associated with being above the national average, such as obesity, heart disease and diabetes rates. The rankings were calculated using the states’ average Z-scores across the six metrics.

Unless otherwise stated, the metrics came from custom queries of the Centers for Disease Control and Prevention’s Behavioral Risk Factor Surveillance System, using the most recent data. Here’s a closer look:

Lifestyle indicators Wellness checkups: The share of adults who had a routine medical checkup in the past year, as of 2020 Exercise: The share of adults who had any physical exercise, including running and walking for exercise, in the past month as of 2020 Local fitness infrastructure: The number of fitness and recreational sports centers in a state per 100,000 population, as of 2019. This metric uses U.S. Census Bureau data to identify the number of fitness centers per state as well as state population estimates.